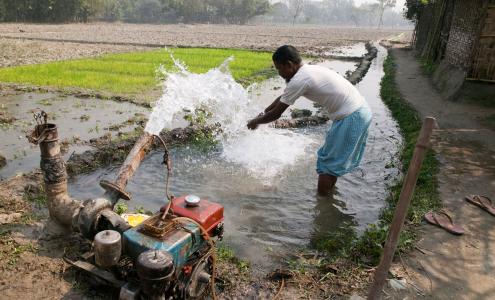 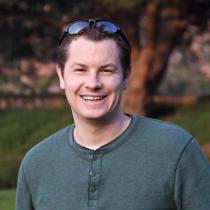 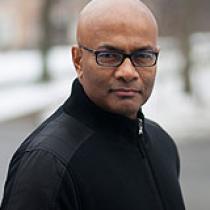 With most studies of energy efficiency focusing on residential or commercial users of electricity, not much is known about electricity use in agriculture, the dominant source of employment in developing countries.

In Bangladesh, domestic and industrial users still account for most electricity connections, but they have increased at a slower rate than in agriculture – particularly in the last decade. Indeed, the agriculture sector is emerging as a major user of electricity.

Groundwater extraction for irrigating rice fields is often fuelled by electricity, and consumption is likely to rise as pumps become more affordable for small-scale farmers. Water extraction, and hence electricity consumption, can be reduced through Alternate Wetting and Drying (AWD) technology, which comprises a simple PVC pipe open at both ends and drilled with holes. When planted in rice fields, the pipes enable farmers to monitor soil moisture and irrigate accordingly (farmers irrigate only when below-ground water levels inside the pipe fall lower than a 15cm trigger).

The adoption of AWD can have a significant impact on incomes, especially in the winter season, when irrigation is used the most. Farmers profit from using AWD, and, when faced with hourly water prices, rather than seasonal water contracts by the acre, are willing to pay more for it.

However, water is often sold by tube well owners (water sellers), who mostly price it by area, rather than volume, and they pay the electricity costs. It is also common for farmers to pass irrigation monitoring and management on to tube well owners, who will carry out day-to-day monitoring of water levels in their area and decide when to schedule an irrigation.

Meanwhile, fragmented landholdings and small plots mean farmers sometimes practice joint irrigation, where several plots are irrigated at once. This leads to a coordination problem, where a lack of control over irrigation timing makes it difficult to make decisions at an individual level.

Furthermore, if all farmers in a tube well area adopted AWD, an economic surplus would be created due to the reduced electricity costs of pumping. Anecdotal evidence suggests water sellers would consider sharing some of this surplus with farmers through lower per-acre water prices, meaning that AWD may then become more profitable for farmers.

This study is one of the first to try to understand if energy efficiency can be increased among agricultural users, and whether electricity use in agriculture can be a target for policy intervention.

It investigated how the uptake of AWD can be increased in situations where per-acre water prices do not create appropriate incentives for farmers to adopt the technology.

The research team aimed to provide experimental evidence on two alternative policy approaches, relative to the benchmark of targeting AWD directly to individual farmers (who do not always directly benefit from the savings). The team tested whether tube well owners should be the target for AWD adoption, and whether encouraging coordinated adoption can induce farmers to use water (and thus electricity) more efficiently and increase profits via lower water prices.

A randomised controlled trial was carried out, with an experimental sample comprising all farmers in 360 villages in the Mymensingh area of Bangladesh, where per-acre water charges are quite common, tube wells are mostly privately owned, and water pumping is often fuelled by electricity.

The villages were randomly divided into four groups. In the first group (105 villages), farmers were directly offered subsidised pipes. In another 105 villages, the subsidised pipes were offered directly to water sellers only. In a third group of 105 villages, pipes were offered to individual farmers, but during a village meeting (this was designed to overcome possible coordination failures – farmers may be able to discuss and figure out how best to procure and place pipes to obtain the greatest benefit in terms of water use). Each group was subdivided and received one of two randomised prices, both of which being lower than the market price of the pipe. The remaining 45 villages acted as a pure control group. Electricity readings from the meters were then taken during unannounced visits to all villages.

The effects of these different policy interventions were tested on several outcomes, including the AWD purchase decision of individual farmers, AWD use, water management, electricity consumption, crop output, and water prices.

The objective of the study was to deliver rigorous evidence on new and scalable approaches to increasing adoption and use of electricity-saving irrigation technology that can make rice production more energy efficient.

Evaluation of the effect of targeted subsidies for technology to use groundwater more efficiently in agriculture.