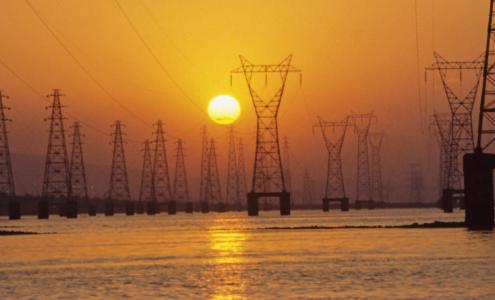 Sub-Saharan Africa and South Asia have an abundance of clean, renewable energy resources, including river systems, sunshine, wind, and geothermal energy. In both regions, renewable energy has the potential to be central to meeting growing energy demands.

Large-scale, cross-border regional and international ‘green grids’ – which connect areas that are rich in renewable energy resources and have high renewable energy generating capacity with areas of high demand – can help open up new markets for large-scale renewable resources.

Linking power infrastructure and markets together could also help address the grid stability challenges associated with high levels of variable renewable energy (an issue for wind and solar energy in particular) by helping to balance supply and demand. There is significant interest among multilateral and international organisations in supporting cross-border grids. However, there are major barriers, including the politics of international cooperation, a lack of information and research, infrastructure and harmonisation issues, and financing.

Understanding these challenges in depth is crucial to unlocking the existing potential. EEG therefore supported a series of roundtable events that focused on ways to overcome barriers and increase opportunities for cross-border electricity interconnections and the trading of renewable energy. The roundtables were organised by Climate Parliament, a global network of legislators promoting renewable energy and the concept of green grids.

EEG co-funded and contributed to several Climate Parliament roundtable discussions on the concept of green grids. The first, ‘Green grids: connecting Asia’, was held at Wilton Park (an executive agency of the FCDO) and discussed the specific challenges, opportunities, and next steps associated with grid interconnections in South Asia.

The second – ‘Energy futures: Green grids, electric cooking and the global energy transition’ – was held in Abu Dhabi in January 2020, before the Legislators Forum and the Annual Assembly of the International Renewable Energy Agency (IRENA). One major theme was to examine the potential for two key transmission routes within Africa: a clean energy corridor running down the eastern side of Africa from Ethiopia to South Africa and grids linking the nations along the West African coast. Discussions also focused on regional grids within South Asia, a clean energy corridor linking South and Southeast Asia, and undersea transmission lines connecting South Asia and the Arabian Peninsula.

Due to COVID-19 travel restrictions and social distancing rules, other roundtable events that had been planned in conjunction with Climate Parliament were replaced with a series of virtual roundtables. In addition to discussing green grids and large-scale renewables (including energy auctions, power purchase agreements, and attracting private investment), the roundtables also covered sustainable transport and mini grids.

Climate Parliament conceived and helped to launch the Green Grids Initiative, which was announced at the recent Glasgow Summit by the UK COP26 Presidency in partnership with India’s One Sun One World One Grid project. The One Sun Declaration issued by the prime ministers of India and the UK together with other world leaders in Glasgow has been endorsed by more than 90 countries.

Since the COP26 launch, EEG continued to support Climate Parliament to stimulate discussion amongst legislators from Africa and Asia on how the Green Grids initiative could be moved forward. Seven further roundtables were conducted in 2022, with topics that included the potential for renewable energy auctions and energy interconnections in Africa, including between the Southern Africa Power Pool and the Eastern Africa Power Pool; the potential for renewable energy interconnections in South Asia, including between India and the Gulf; the challenges and opportunities for renewable energy in Bhutan; and climate finance for green grid investments.

Climate Parliament’s list of 'action ideas for parliamentarians' can be accessed here.

What are the potential advantages of inter-country or inter-continental trade in renewable electricity?

The CEO of ACWA Power at the Climate Parliament virtual roundtable, May 2020.