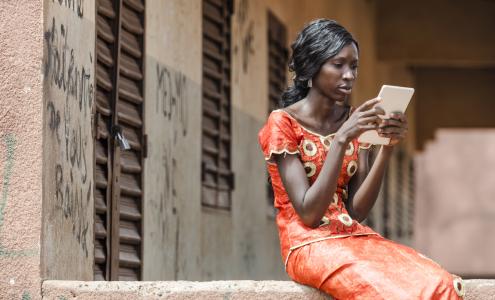 Emergencies like pandemics, natural disasters, and economic crises test a government’s resilience and preparedness in supporting its population. How can governments best distribute aid to citizens? In countries with established financial infrastructure, such as the US, governments can send money directly to citizens. But in many countries, strong financial connections between the government and individuals may not exist. In these contexts, what can governments do? In response to the COVID-19 crisis, 186 countries implemented direct cash transfers to households, and 181 introduced in-kind programmes that lowered the cost of utilities such as electricity, water, transport, and mobile money.

Evidence shows cash transfers dampened the economic impacts of the pandemic and subsequent lockdowns. In many African countries, mobile money is an important tool for providing cash transfers, particularly for populations excluded from formal financial institutions.

But in-kind transfers may be preferable if they circumvent savings constraints or lower transaction costs. In-kind transfer programmes can be attractive to governments lacking infrastructure to distribute cash broadly, beyond vulnerable populations already receiving government aid.

In March 2020, the Government of Kenya expanded its existing social safety net, Inua Jamii, which provides cash transfers to its most vulnerable populations, and launched urban public works employment schemes.

In May 2020, Ghana provided an additional round of cash transfers to existing recipients of the Livelihood Empowerment Against Poverty (LEAP) Program, which targets around 5% of Ghana’s poorest households.

The government of Ghana also launched an electricity relief programme, citing the importance of reliable electricity during economic downturns. All households with an electricity connection were eligible to receive a monthly transfer, with transfer amounts pinned to consumption in March 2020 before the programme was announced. In practice, not all households received transfers and there was significant variation in the timing and consistency of monthly transfer receipt.

The design and implementation of social protection programmes can meaningfully affect their overall impact. During an economic crisis, should policy makers distribute cash transfers or in-kind transfers such as electricity subsidies? And how does a country’s financial infrastructure affect the relative efficiency of these types of government aid?

This research, part-funded by EEG as an extension to the GridWatch project, asked:

The project combined household surveys in urban Ghana and urban and rural Kenya, and a randomised experiment in urban Kenya.

Over a study period of seven months, between May and November 2020, 3,211 respondents in Kenya (983 urban and 2,228 rural) and 1,245 urban respondents in Accra in Ghana were surveyed by phone between one and three times each. The Kenyan urban sample was broadly similar to electricity customers in Accra, based on observable characteristics like housing quality and appliance ownership, and comprised households located in urban areas connected to the grid and using pre-paid meters to pay for electricity in advance by purchasing electricity credit, or tokens. The team elicited respondents’ preferences to compare demand for and impacts of transfers in the form of mobile money and pre-paid electricity credit.

The main findings were: